Occupy LA protesters occupied the sidewalk outside Bank of America at 7th Street and Figueroa in Downtown Los Angeles today going toe to toe with the LAPD in their most contentious interaction since the Occupation began 39 days ago.

The protesters confronted Bank Of America patrons, encouraging them to take their money out of big banks. They sat and lay on the sidewalk, thought not obstructing traffic, they were in violation of the law that forbids people from sitting, laying or sleeping on city streets. 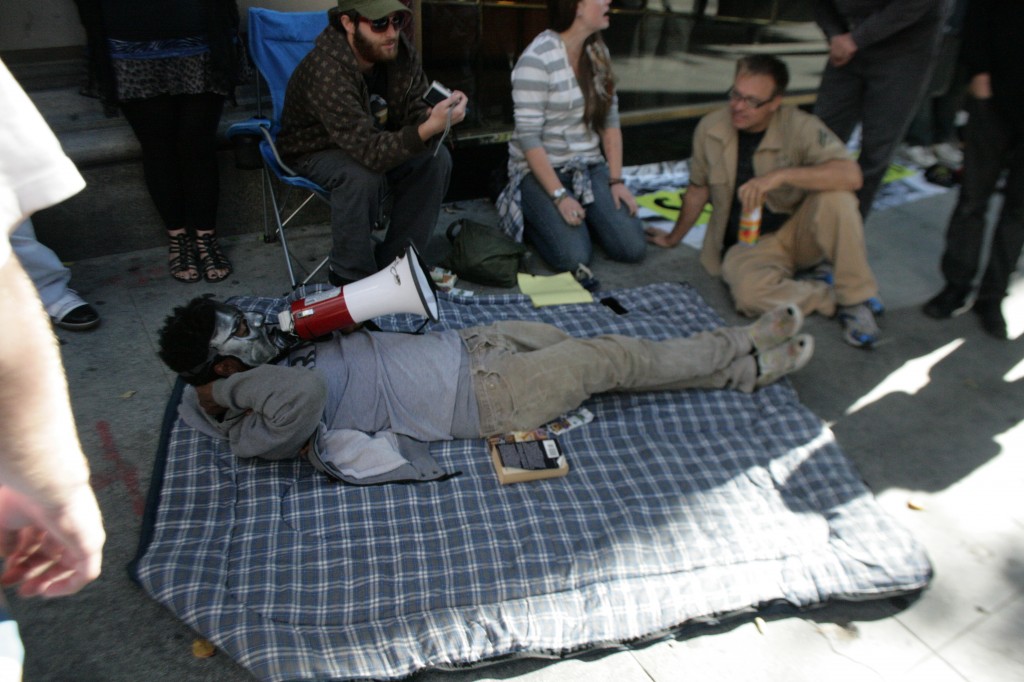 Though their initial plan for the action was to pitch tents and occupy the busy corner in the financial district during the business day, they agreed to alter their plans when threatened with arrest by the LAPD.Protester sat and laid on the sidewalk, thought not obstructing traffic, they were in violation of the law and agreed not to pitch tents and LAY on the sidewalk.

Until today, tolerance has been the tactic from the LAPD. This stand off marks the most antagonistic interface between protesters since the occupation began. The love between police and protesters may be coming to an end.

The Reverend Jesse Jackson made an appearance and spoke to the occupation at City Hall in Los Angeles tonight. Jackson’s comments included the following;

“We the people will win. This land is your land. Made for you and made for me. We’ll occupy for jobs, for justice, and health care and education till something happens. We’ll remain non violent and discipline and focused were part of the world wide movement for economic security.”

This video from the Trayvon march in South Central on 11/14/13 (below) is not anomalistic in any sense in Los Angeles. If you…
By Sam SlovickJuly 15, 2013

Me on John Rabe’s Off-Ramp on KPCC from Occupy L.A.

John Rabe has been seen lingering around the steps near the South Lawn at City Hall (in a good way). I’m interviewed…
By Sam SlovickJuly 17, 2012

More vacuous non-reporting and misrepresentation from the LA Times in today’s “Removal of Occupy L.A. camp may be good for public health”…
By Sam SlovickNovember 30, 2011