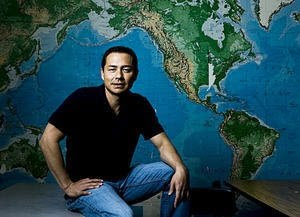 Giving L.A.’s dropouts a second chance
BY SAM SLOVICKPublished on April 20, 2009 at 2:09pm
There are at least 63 moons of Jupiter, about the same number of students under the tutelage of Alex Stickler (aka Mister) on any given weekday at downtown’s Abram Friedman Occupational Center. Steady and studied, Mr. Stickler mans the shot-caller seat in a capacity-crowd classroom, a sea of bodies in hoodies and iPods and ear buds hunched over textbooks at single desks. No ordinary star in the vast expanse of the L.A. Unified solar system, to these kids, Mr. Stickler is Teacher of the Year. Third eye wide open, he takes in the 360-degree panorama of the classroom without blinking.Kevin Scanlon[Photo]Alex SticklerThe kids at Abram Friedman, a generation of new moons constantly spiraling into his galaxy, are former high school students, inner-city dropouts who were derailed and are now attending adult school to get their diplomas or GEDs.Born in Seoul, Korea, Stickler transplanted himself to L.A. in the ’90s by way of Tucson, Arizona. Initially losing his footing in Tinseltown, he regrouped, embracing a meditative practice, and hit his stride as an educator with an expanded consciousness and a gift for working with kids in need of a teacher — a real teacher.Bernard Smith, 18, of formidable stature in a blue-and-white-striped polo shirt, approaches Stickler respectfully. He is smart, articulate, focused and engaging, but he hasn’t had it easy. “I lost a family member,” he says. “My mom. I was 17.” The devastation is still fresh on his face. “I missed the last semester of school. That was her wish for me, to get my high school diploma. I’m about to finish my last class and then take my GED test. Stickler’s helping me stick through it. Oh man, he’s a great teacher. He’s the best teacher here. He cares the most. He helped me by teaching me that if you don’t care, nobody’s going to care. Problem was me not taking school serious. But what I seen was somebody who cared, so now I work and I’m getting work done.”Stickler has taught in L.A.’s Adult Education division for seven years. He’s lead teacher in the Individualized Instruction Lab, a multisubject high school classroom where students work on English, history, algebra, health and other subjects at their own pace.“The best part is starting with a student who comes in scared, angry and has no confidence,” Stickler says, “ then building a connection with that student and getting them to wake up to their own potential.” Still, the job is exhausting. Some students he can’t help. “They’ll try for a while, then disappear,” he says. “I don’t know what happens to them. You just deal with it.”Still, he can get worked up over the LAUSD dropout rate. “This is the net that catches them. But this shouldn’t happen. A monster district like this needs to be reorganized,” the Teacher of the Year rants for a moment, until a student approaches his desk to get her homework checked — a girl who didn’t graduate because she had been cutting classes with her friends.She is Stephanie from Van Nuys, with braces, purple sweater, young, perky but reserved. “I’m finishing my history,” she says. “I used to ditch a lot.”Stephanie wasn’t interested in school. She thought it was a joke. “I was ditching. All my friends were, too. I thought we were all going down together, but I was the one who ended up not graduating. The rest of them did.” Stephanie carries herself confidently, holds my gaze for a few seconds, then looks away. The wound is still fresh.Stephanie is now taking classes to become a registered nurse. She says Stickler deserves to be Teacher of the Year. “Teacher of the Year?” Stickler says. “I wasn’t expecting it at all. I was blown away. I try to work my hardest every day so I guess people noticed. It’s sad these days that teachers have lost respect in society. A lot of times teachers take the fall for parents who aren’t doing their job. These days there are two working parents and nobody raising the kids. By the time they get to my classroom, I feel like I’m the one socializing them, teaching them how to respect their elders, basic behavior modification.”And as Stickler points out, his rules are nothing compared to facing the job market without an education.Click here for a complete list of L.A. People 2009.